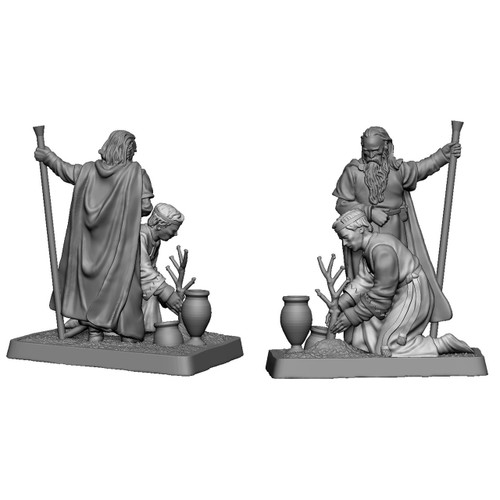 The White tree was a symbol of Gondor and its royal lineage, and was a direct descendant of Telperion in the far-west. If the tree died, one of its seedlings would be planted in its place but after the latest descendant perished in 2852TA no seedling could be found and the dead tree was left in place. However, after the war of the Ring, Aragorn found a new seedling growing on the hills above Minas Tirith and replanted it anew in the court of the fountain. This vignette shows Aragorn planting the sapling while Gandalf looks on.
This is the 152nd release in the Gold Status Fellowship club and was May 2018's Winning idea. It was suggested by 'Mornedhel'. Base measures 30x23mm. Includes base, two figures and 3 small parts.