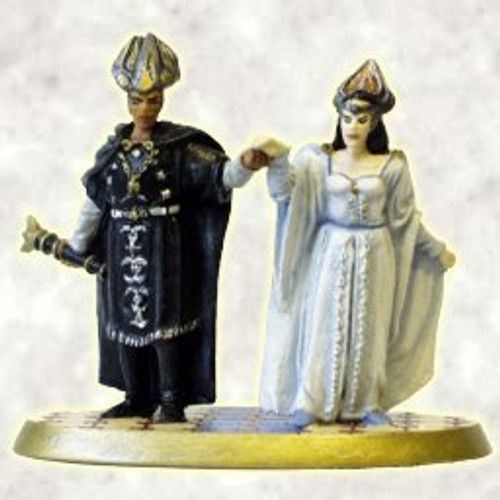 Arwen, daughter of Elrond and Celebrían, was born in the year 241 Third Age in Imladris. Her brothers were Elladan and Elrohir. She was called Undómiel, the Evenstar of the Elves. She spent most of her lives in Imladris and Lórien. Her beauty was so great she was compared to Lúthien.

In 2951, Aragorn was walking in the woods near Imladris, singing the Lai of Lúthien, when he saw a maiden. Thinking he had wandered astray in a dream, he had the impression that she was Lúthien herself walking before his eyes. He called her Tinúviel, Tinúviel! as Beren had. That is how he met Arwen.

In 2980, Aragorn, weary to travel the world and wishing to rest in Imladris, happened to go through Lórien. There, grown to full statue of body and mind and wearing rich clothes offered by Galadriel, he saw Arwen under the trees of Caras Galadhon. They stayed together during the whole season and, on the evening of Midsummer, upon the hill of Cerin Amroth, they plighted their troth.

However, Elrond set a condition to their wedding: Aragorn should first gain the crowns of Gondor and Arnor.

During the War of the Ring, she wove a standard for Aragorn, upon which "flowered a White Tree, and that was for Gondor; but Seven Stars were about it, and a high crown above it, the signs of Elendil that no lord had borne for years beyond count. And the stars flamed in the sunlight, for they were wrought of gems by Arwen daughter of Elrond; and the crown was bright in the morning, for it was wrought of mithril and gold."

When the war was over, upon the day of Midsummer, in presence of Elrond, Elladan, Elrohir, Glorfindel, Celeborn and Galadriel, Aragorn married Arwen in the City of Minas Tirith.
With this wedding, Arwen made the same choice as Lúthien and her fate was parted from the fate of the Elves. But as a last gift, she left Frodo her place in the boat which should have taken her to the West.