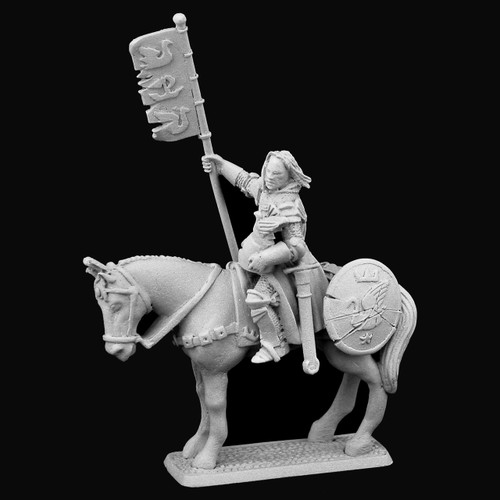 Imrahil was the twenty-second Prince of Dol Amroth.
During the War of the Ring Prince Imrahil led a company of Swan Knights and 700 men at arms to Minas Tirith to help defend the City. Prince Imrahil led the sortie that rode to aid Faramir, the son of Denethor, the Steward of Gondor and the rear-guard retreating from Osgiliath when the forces of Sauron overran the Pelennor Fields. Gandalf rode with them, and the Nazgûl fled before him. The Knights of Dol Amroth rescued the wounded Faramir from the Southrons, and Imrahil carried him back to the City on his horse. Prince Imrahil assisted Gandalf in the city's defence when Denethor went mad with despair.

While paying his respect to the body of King Théoden of Rohan at the Battle of the Pelennor Fields, Imrahil noticed that the Rohirrim also bore the body of Éowyn. He perceived that she was still alive and he sent to the City for help.

Dieter Waltermann commissioned this Designer figure and worked with Chris Tubb in finalising the details, pose and accessories.