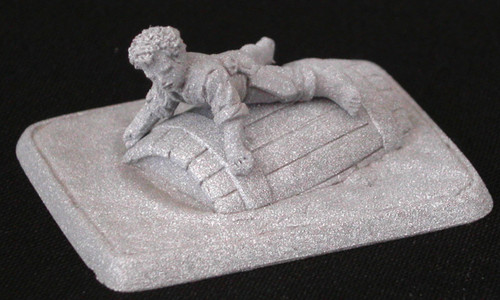 In Mirkwood forest the Bilbo and his companions finds nothing but trouble. First Bombur, a most overweight dwarf, falls into a poisonous stream which causes him to fall into a deep sleep, forcing the rest of the company to carry him. Afterwards, they see elves in the distance, celebrating in the forest. But each time they approach them, the elves disappear in a flash of blinding light. They finally give up on meeting the elves, but are then captured by giant spiders who hang the dwarves from trees in preparation for eating. Bilbo manages to escape, free the Dwarves and frighten then spiders away, only to find that while he was fighting spiders the Dwarves have been taken prisoner by the Wood Elves.

Bilbo manages to slip into the elven halls and find the poor Dwarves who are locked deep in the dungeons. After weeks of hiding with the aid of his ring, the hobbit manages to free the Dwarves. But to escape the elven caverns, he must stuff each of them into an empty barrel which is rolled into the river. He jumps in after the last barrel and rides it like a raft all the way to Laketown on the Long Lake.

Dimensions: Bilbo the Barrel Rider is 17mm in height from base to top of Bilbos raised head. The base is 25mm wide and 33mm in length.

This is the 7th release in the Gold Status Fellowship club and was January 2006's Winning idea. This MS441 miniature was suggested by Brian Loughlin Lunt (a.k.a. Dreadlord).