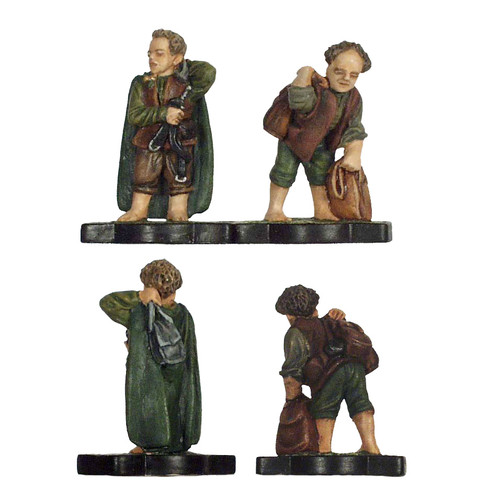 Frodo Baggins and his friend (and gardener) Samwise Gamgees were central characters in the Fellowship of the Ring and both, at times, carried the One Ring of Sauron, as they travelled from the Shire, their Hobbit homeland, through many adventures and mishaps, all the way to Mordor, and the Mountain of Doom, a volcano. Only here could the One Ring be destroyed.

Assemble the figures before painting. As Frodo & Sam and Pippin set off from BagEnd in their dark cloaks, they were as invisible as if they all had magic rings so avoid making the cloaks and cloths too light. On the journey they 'curled up in their cloaks and blankets and were soon to sleep' so the cloaks might not be as clean as they could be.

As hobbits go, Frodo was of medium height, with thick brown curly hair. He was not as fat as most hobbits. The Fallohide in him made him lighter skinned then a full-blooded Harfoot. Frodo's shirt is painted using yellow green 881 with a wash of 890, his clock is given a slightly darker treatment using 875 with a wash of 896 and then highlighted. As hobbits liked colours that existed naturally, many of the modern military camouflage colours are suitable. Gold 996 buckles are added to the cape. His waist coat and trousers are given a coat of brown 981 with a darker wash of 984. His satchel is given a light grey 989 with a wash of a darker grey 995, As this figure is taken from the start of their great adventure, care should be taken not to make his luggage look too worn. The knife Frodo is holding was given a silver handle along buckles. 950 is used for the belt & scabbard in his hands. The bases are finished with Green 890, and dry brushed with yellow, to give the effect of grass.

Sam is described as short, with thick, curly brown hair with brown worn hands from garden work. Sam's shirt and trousers are first painted with 988 and wash of 830. His jacket is given a coat of brown 940 with a darker wash of 950. The bags are given 981 with a wash of 984. The bases are finished with Green 890, and dry brushed with yellow, to give the effect of grass.