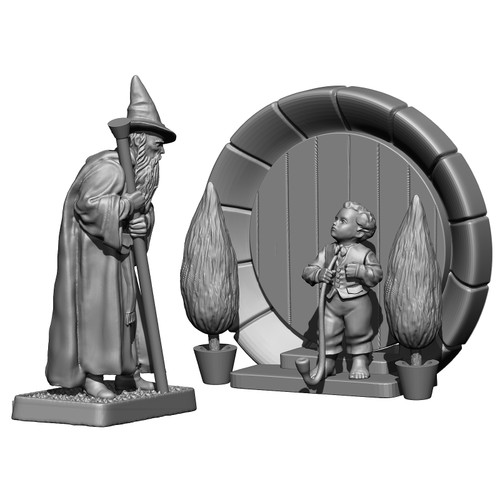 Gandalf the Grey visited the Shire and the home of Bilbo Baggins. Bilbo was surprised but polite because Gandalf seemed to know his mother. Gandalf wanted him to come on a grand adventure, but such activities was frowned on by the peaceful Hobbits. Gandalf marked the door with a symbol and later on Dwarves began to visit Bilbo. Bilbo was a gracious host but found them intrusive. Gandalf arrived again and mentioned he wanted Bilbo to be a "burglar" and go to the Lonely Mountain where Smaug, a powerful Dragon, resided in a former Dwarven stronghold, that Thorin, the leader of the band of visiting Dwarves, wanted to reclaim as his rightful heritage. Bilbo very reluctantly followed them on their adventures, changing his life forever. This adventure resulted in him becoming a ringbearer and potentially saving Middle-earth from destruction by denying the One Ring from its master.

This is the 177th release in the Gold Status Fellowship club. This was not a Fellowship idea but was envisioned by our sculptor. There are eight parts that require assembly (i.e.: Door, Gandalf, Bilbo, 2 potted plants, Gandalf's staff and base and Bilbo's pipe). All parts are made of an alloy of tin, zinc and antimony.