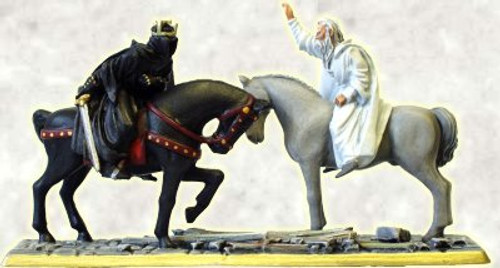 Gandalf is the best-known of the Maiar of the people of Valinor. He was known as Olórin who dwelt in the gardens of Irmo and was the pupil of Nienna. When the Valar decided to send the order of the Wizards to Middle-earth, Olórin was proposed by Manwe, in order to counsel and assist all those in Middle-earth who opposed Sauron. He is said to be one of the wisest of that order, rivalling Saruman, with whom he had a strained, competitive relationship.

The Lord of the Nazgul was Sauron's most dreadful servant. He was once a Man who became corrupted by one of the Nine Rings of Power. He established the realm of Angmar and became known as the Witch-king, and though Angmar was defeated it was foretold that the Witch-king would not fall by the hand of man. During the War of the Ring, the Witch-king led the hunt for the Ring-bearer and he commanded the forces at the Battle of the Pelennor Fields where at last he met his doom.