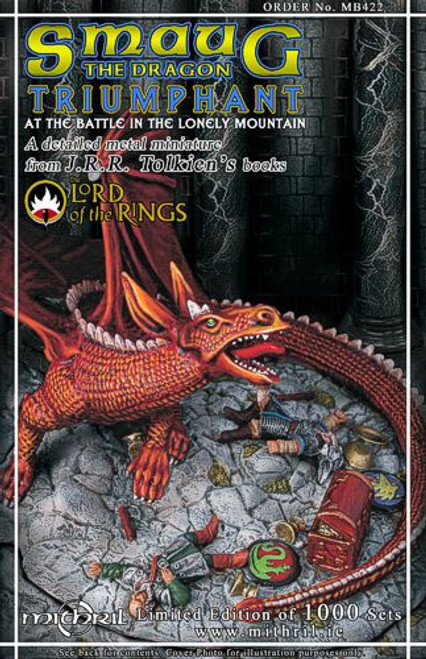 Smaug was the greatest Dragon in the latter part of the Third Age. He was intelligent and cunning and was able to speak the Common Speech. With his gaze he could put people under a dragon-spell and compel them to do his bidding.

In 2770 he came out of the North and descended upon the Lonely Mountain, where the Dwarves had a prosperous kingdom. He set fire to the woods and to the town of Dale and he slew the Dwarves and Men who tried to oppose him. Then he entered the Lonely Mountain through the Front Gate and routed the Dwarves from the halls and tunnels. Thror, the King Under the Mountain, was able to escape through a secret door with his son Thrain and they fled with the remainder of their people.

In the vast dungeon-hall at the Mountain's root, Smaug amassed the treasures of the Lonely Mountain into a great pile which he used as a bed. He emerged from the mountain from time to time to hunt prey, particularly maidens, until Dale was deserted. Lake-town on Long Lake was the closest to the Lonely Mountain that anyone dared to live.

Our Smaug Triumphant is moderately easy to assemble with a comprehensive guide (download option available) included. Requires glue (not included).

The Boxed Set include 17 pieces, including 2 dead dwarfs and a treasure chest. All to exact scale. This is a heavy boxed set - about 600 g of pure metal. No cheap plastic parts!.

"I kill where I wish and none dare resist. I laid low the warriors of old and their like is not in the world today. Then I was but young and tender. Now I am old and strong, strong, strong. Thief in the Shadows! My armour is like tenfold shields, my teeth are swords, my claws spears, the shock of my tail a thunderbolt, my wings a hurricane, and my breath death!" Quote by Smaug to Bilbo in 'The Hobbit'.

Realistic Middle-earth creature influenced by the description in 'The Hobbit' book written by J.R.R. Tolkien. Dimensions: 62mm in height from base to raised wing tip.