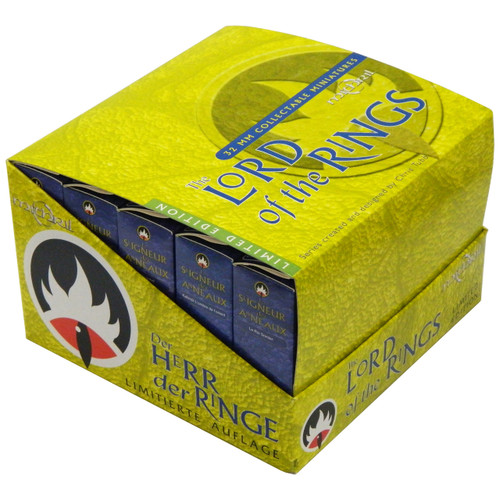 This box set contains LR21 to LR30, including figures not available separately.

The great quest of the One Ring begins at the eleventy first birthday party of Bilbo Baggins, an elderly Hobbit who, many years ago, had obtained a ring of invisibility. Little did he know then that this object was none other that the One ring of Sauron and that upon its survival or destruction, rested the entire fate of Middle-earth and all its peoples.

Upon discovering the true nature of the ring and of the immanent danger, thus, placed upon the Hobbits of the Shire, Gandalf the Grey sought aid from the Rangers of the North, who set a secret watch upon its borders of the Shire, to protect its unsuspecting inhabitants from the agents of the Dark-lord, who even then were closing in around them. Gandalf also persuaded Bilbo to pass on the One ring to his nephew Frodo, which he reluctantly agreed to do, and which came about after Bilbo's farewell speech at the great party.

Frodo, the new ringbearer, with his servant Sam, and his companions, Merry and Pippin, set out from the Shire, under the wizard's instruction, on the start of his long journey to Mordor and the Cracks of Doom, where the One Ring might be destroyed. The terrible Ringwraiths, Sauron's mightiest servants, stalked them through the Shire, and only a circuitous route and the help of Farmer Maggot, enabled the four Hobbits to escape eastwards into the Old forest. Here again they met great dangers but once again friends were at hand to offer help and shelter. The house of Tom Bombadil gave them rest and respite from the encroaching shadows of the Dark-lord and his servants.

The 10 figures are from the Shire to the Barrow Downs series: