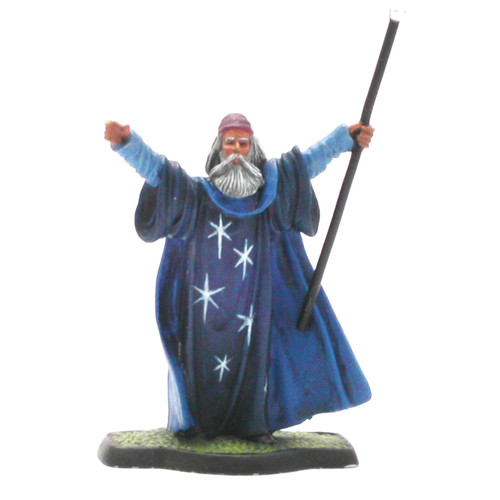 The Blue Wizards were members of the Order of Wizards, the Istari. They are not human and came to Middle-earth to protect and guide the races from the influence of evil, most notably Sauron. However we know little about these other wizards from the books of J.R.R. Tolkien or their impact on the events that occured during the War of the Ring.

The Painting Guide:
One of the pairing of Blue Wizards, the main focus of this miniature will rest with the head and shoulders and the dramatic shape of the robe, so the lightest highlights should be confined to these areas.
An initial base coat of blue/grey will serve best, followed by a selection of blues for the clothing, nothing too light at this stage. These blues may then be given an overall wash of black or a mix of blue and black to form the deep shadows. It may be noticed that the blues have become more vibrant with this wash.

Highlighting all of the areas of cloth with a progressively lighter tone of blue will eventually pay off as the most important areas of the head and shoulders are reached. Paying particular attention to the edges of the robe will define this further.

Never expect immediate results from highlighting, patience are always rewarded. Subtle blue presents a particular problem for highlighting, in that the mid-tones will show up too strongly. This can be taken care of by the addition of a small amount of black or grey mixed in with the paint whilst dealing with those areas.

Skin tones from a brick red through to a cream on the bridge of the nose, cheeks and forehead will contrast well with a wash of dark brown over tan for Pallando's beard.

MM500 Lord of the Rings 'Gandalf™ on the bridge of Khazad-dum™' 32mm Scale Metal Miniature.