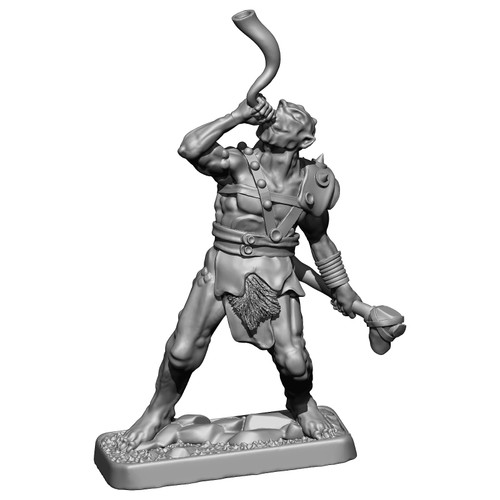 Trolls were huge powerful creatures, and come in many variations. Many served in Sauron's armies in different roles. Some of these were furnished with crude armour to enhance their already formidable features and used as frontline troops. This troll served to alert the hordes when to attack or advance and also intimidate their foes using simple horns that emitted deafening noise that would chill the hearts of their enemies. They were very vulnerable to sunlight by default, so they preferred to attack under the cover of darkness or strong cloud cover. Some breeds were created to be more resistant to sunlight than normal, allowing them to function by day moderately well.

This is the 175th release in the Gold Status Fellowship club and was May 2020's Winning idea. It was suggested by 'ddaines'. The figure is 55mm in height. There are three parts that require assembly (i.e.: base, weapon-arm and body). All parts are made of an alloy of tin, zinc and antimony.