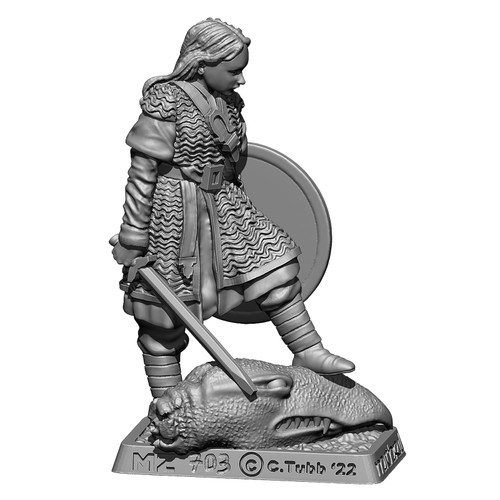 Eowyn was a lady of Rohan and also a shieldmaiden. She disguised herself with a helm and armour (using the name Dernhelm) to join the army sent to defeat the armies of Mordor that was attacking Minas Tirith, Gondor's capital city.
During that fierce battle of the Plennor Fields she saw King Theoden being attacked by the Witch-king on a flying Fell-beast. She confronted the mighty Nazgul and chopped off the head of the reptilian Fell-beast. Merry Brandybuck then stabbed the leg of the Nazgul with his magical sword (designed to harm the Witch-king), weakening him to mortal weapons, and Eowyn struck the final blow to end that creatures existance. She nearly died from her wounds and the poisonous aura of the Nazgul but was revived later in the Houses of Healing.

Only 100 of these figures are produced. This is the 191st release in the Gold Status Fellowship club. This was the winning idea from July 2021 and was submitted by Fellowship member "gilgaladtolkien". This is the third fully resin figure, undercoated with matt grey primer. It is created in one piece. The base has the manufacturer name, MITHRIL, date and number on the sides of the base and also has the product number, copyright name and date and manufacturer name on bottom. It measures 21mm in length, and is about 35mm in height from the base to the top of Eowyn's head.