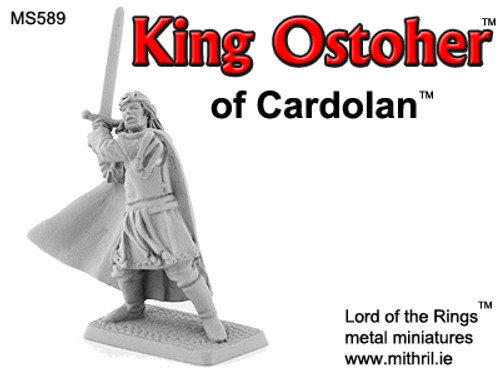 Ostoher was the last effective king of the successor state of Cardolan in the early fifteenth century T.A. His kingdom, along with Rhudaur and Arthedain, had been weakened by years of civil strife and latterly by the incursions of the Witch-king. During the second Northern war against Rhudaur and Angmar, Ostoher and his two sons were slain at the battle of Tryn Gorthad, leaving his young daughter Nirnadel (M32) as his sole heir.

In T.A. 492, the Olog Warlord Rogrog led his orcish forces through Rhudaur and down the Gwathló valley to strike Cardolan from the east.
The assault crushed the Dúnedain, and the Half-troll's armies swept northwestward along the Old North Road. Rogrog sacked the Cardolian capital, forcing King Ostoher to flee. Ostoher travelled north into the barrow-downs, hoping to reach Arthedain. Unfortunately, Rogrog's Orcs cut him off before the King could take refuge in the Old Forest.

From ICE's Lost Realm of Cardolan.

This is the 87th release in the Gold Status Fellowship club and was October 2012's Winning idea. It was suggested by 'H.Wolf'. 40mm in height from the bottom of the base to the top of the sword.