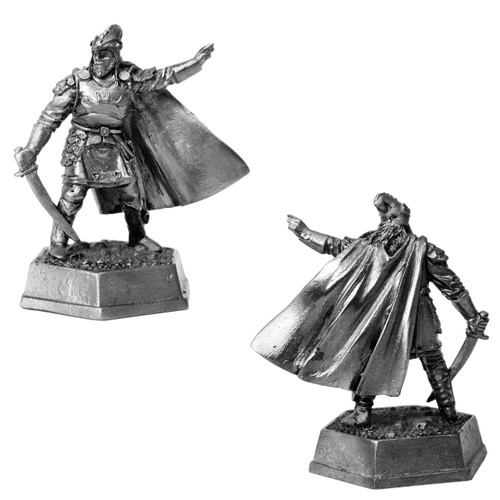 Originally a Numenorean foundation, the great port of Umbar, since the Second age had been a refuge of rebels and renegades against the power of Gondor.  It changed hands many times between Gondor and the piratical Corsairs  whose impressive naval might was a constant thorn in Gondor’s side. At the end of the second millennium of the Third-age it was taken by the Haradrim and under their leadership continued as a great naval power whose privateers menaced all the shipping on the Belegear. It also had great trading fleet whose owners became wealthy and powerful. This figure  is one such merchant prince, part pirate, part trader. His helm shows the style of the black Numenoreans  whose culture and influence have permeated the city since the second age when they first sought refuge within its walls.

Measures 40mm from bottom of base to top of helmet. Ships in a blister pack.

There were 180 32mm scale metal miniatures produced. The majority are Antique Finished. This means that they are polished, dipped in black paint, then the excess paint is removed on the raised surfaces and left in the deeper areas, then polished again which gives fantastic detail to the figure.