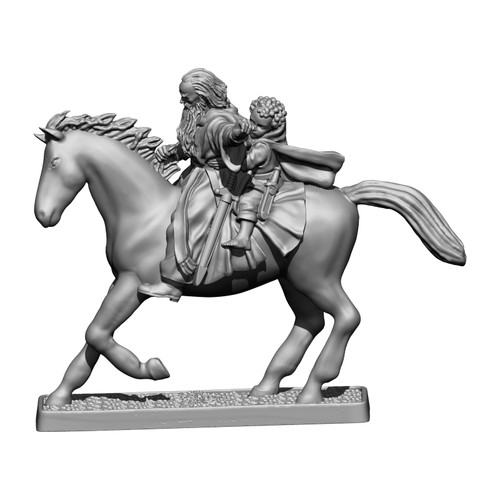 Gandalf took Pippin on the back of Shadowfax back to Minas Tirith, the Capital of Gondor, currently under siege by the forces of Mordor. He brought with him the Rohirrim, from the lands of Rohan. Shadowfax is so intelligent that he does not require any reins to direct him, instead Gandalf simply tells him what he needs him to do.

Only 100 of these figures are produced. This is the 189th release in the Gold Status Fellowship club. This was the winning idea from June 2021 and was submitted by Fellowship member "aragorn". This is the first fully resin figure, undercoated with matt grey primer. It is created in one piece. The base has the manufacturer name, MITHRIL, date and number on the sides of the base instead of the bottom, due to technical requirements in its manufacturing. It measures 58mm in length from the horse's nose to its tail, and is about 47mm in height from the base to the top of Gandalf's head.