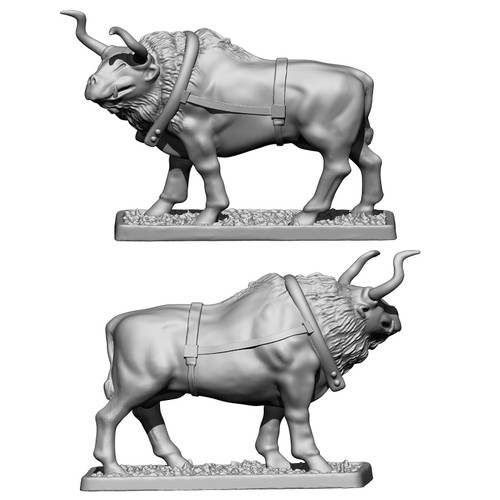 These are large muscular beasts that are used as beasts of burden for the armies of Mordor. They were used to haul the head of Grond into the battlefield. However they may be dangerous if they break free and run amok, as they will savage and gore anyone in their path. The sculpt was envisioned to match the original ideas mentioned in the forum:

"..I would see it as some form of four-legged horned creature, but of mammal origin rather than reptilian/pseudo dinosaur type, with matted hair around the fore-part of the body (similar to the Bison), but with larger horns.."

This is the 176th release in the Gold Status Fellowship club and was June 2020's Winning idea. It was suggested by 'ddaines'. The beast figure is 55mm in length. There are four parts that require assembly (i.e.: base, 2 horns and body). All parts are made of an alloy of tin, zinc and antimony.