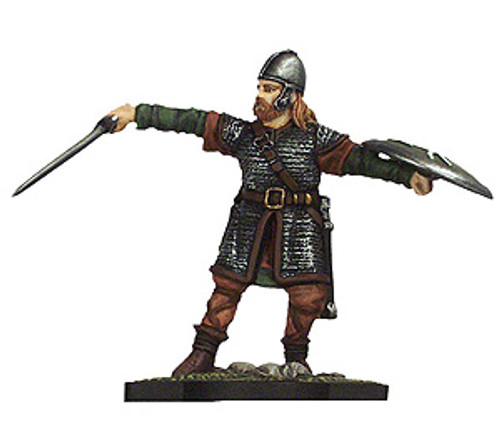 During the time of the War of the Ring, Grimbold distinguished himself fighting alongside Elfhelm and Théodred, Théoden's son, in the Battles of the Fords of Isen. In particular, Grimbold managed to save Théodred's body from Saruman's Uruk-hai after he was mortally wounded. Grimbold later assumed command of the Rohirrim of Westfold as Erkenbrand was delayed, sharing it with Elfhelm of the East-mark.

While Elfhelm wanted to abandon the Fords, Grimbold wanted to hold them, partially due to the tradition of Westfold. Grimbold was surrounded but his shield-wall held despite no aid from Erkenbrand and Elfhelm. Grimbold then orchestrated a daring break out. He mounted all the riders for whom he had horses and made a gap on the east side of the wall through which the riders passed. They formed into two groups and attacked the north and south sides simultaneously. In the ensuing confusion, the remaining Rohirrim retreated on foot as quickly as they could in the dark.

As a reward for his valour, he was promoted to Third Marshal of the Mark (holding the function though not the title), which was left vacant when Éomer was reinstated to lead the First Éored during the Battle of the Pelennor Fields. Grimbold fell in that battle and in song he was fondly remembered as "Doughty Grimbold".