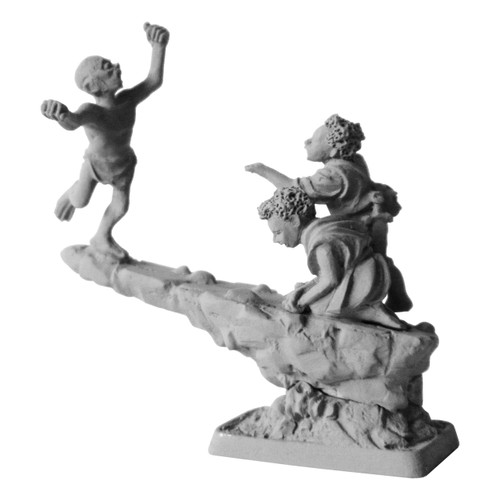 This vignette shows the pivotal and climactic moment in the War of the Ring, when the fates of the Free peoples of Middle-earth and that of Sauron himself are all focused in the poor mad creature Gollum as he is re-united at last with his "precious” and dances in a wild ecstasy above the fires of Orodruin whence the One ring was first forged. Frodo, diminished in spirit and weary in body at the end of his quest, kneels in agony clutching the stump of his finger which Gollum has just viciously bitten off. Sam, redoubtable as ever, rushes forward to protect his master from the insane creature.

But Gandalf had been right in his prediction that Gollum was to play an important part in the fate of Middle-earth. In this last act of the great struggle, Gollum will plunge to his death in the volcanic pit and in doing so will unwittingly destroy the Dark-lord himself whose very essence and power are bound up in the One Ring.

It is primed in Mithril's special paint, and will need some assembly. Weight when assembled is 25 grams. Height is 40mm approximately from base to Gollum's hand with One Ring.