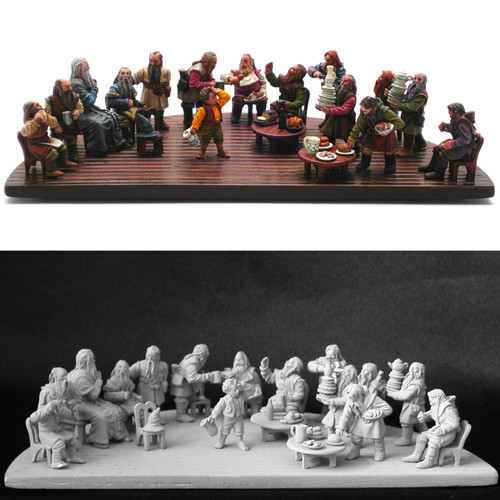 The "Unexpected party" vignette depicts the famous party from the first chapter of THE HOBBIT where Gandalf introduces the thirteen Dwarves to Bilbo the Hobbit. The Dwarves are exiles from the kingdom under the mountain which has been taken from their people by the great dragon Smaug.
Thorin Oakenshield, their leader, has planned an expedition to re-take their mountain home and to destroy Smaug in the process. The expedition has been encouraged by the wizard Gandalf who wishes to recruit Bilbo Baggins, the Hobbit, to their cause. Bilbo, like most Hobbits is unadventurous and home-loving and seems an unlikely candidate for the role of burglar which Gandalf has in mind for him. The Dwarves also doubt his suitability but Gandalf, a shrewd judge of character, has every confidence in him "There is a lot more in him than you guess" he tells Gloin at one stage during the party "and a deal more than he has any idea of himself".

The party itself is unexpected because Bilbo had invited only Gandalf and the poor Hobbit is increasingly flustered when strange Dwarves begin to arrive at his door in twos and threes. Each time he thinks the company is complete, more Dwarves appear until at last he has thirteen of them eating and drinking in his parlour together with Gandalf who arrives last. The party is a very makeshift affair with Bilbo rushing to the pantry (fortunately well stocked!) to fetch various food and drink for his hungry guests.

When the feasting is finished the Dwarves (except Thorin who is too important) lend a hand to clear away the dishes. They "...made tall piles of all the things. Off they went, not waiting for trays, balancing columns of plates, each with a bottle on the top, with one hand, while the Hobbit ran after them almost squeaking with fright.." Bilbo is terrified that all his precious crockery will be broken, but as it turns out the Dwarves break nothing!

Next, the Dwarves provide some entertainment. Each has brought with him a musical instrument and upon Thorin's command "Now for some music", the fiddles, clarinets, viols, pipes and drums are fetched from the hallway. Following the lead of Thorin's harp "the music began all at once, so sudden and sweet that Bilbo forgot everything else". The Dwarves sing their song which tells the story of the coming of Smaug and the destruction of the kingdom under the mountain, and after it is ended fall to discussing their plans for re-taking the mountain realm which the dragon has made his own.

They talk long into the night and Gandalf produces the map of Thror which reveals a possible point of entry into Smaug's lair, namely a small and secret door in the side of the mountain.

It is at this point that Bilbo's role as "Burglar" becomes clear to all, and in the excitement of the moment, carried along by all the romance of the tales of adventure and daring that had pervaded the party, the Hobbit agrees to go with Thorin's expedition, a decision he was to regret many times during their fateful adventure.

Chris Tubb's thoughts on his vignette:

I was delighted when the suggestion was first made that we produce an Mx series depicting the "Un-expected party". This is personally my favourite kind of theme, harking back in many ways to the far off days of the "Prancing pony" which I think has always been my favourite release. I love pieces that contain some whimsy and humour, other examples of this being Lobelia and Lotho, Gandalf and the Hobbit children and the series with Beorn's dogs.

The Unexpected party has provided me with plenty of scope to indulge these preferences. This piece is probably the most ambitious that I have undertaken as the designer of Mithril.

It depicts the scene from the first chapter of "The Hobbit" where Bilbo first meets Thorin's band of Dwarves and agrees to go with them to the Lonely mountain as "burglar". There are four distinct phases in the chapter; the feast, the clearing-up, the music-playing and the planning of the venture. Rather than selecting just one of these, I decided to conflate the various phases together in order to produce a visually more interesting piece. I have grouped the Dwarves together in distinct sub-vignettes each of two or three figures.

So starting from the left we see Nori and Ori, one practicing on the flute while the other still has his in a little pouch at his side.

Next is the central group of three figures comprising Balin, Gandalf and Thorin. Gandalf and Thorin are both seated and smoking their pipes while the map lies upon the latter's lap. I decided to place Balin (always the most important of the group after Thorin himself) next to them as if also taking part in this the only serious conversation that is happening in the vignette.

The next group of three, namely Bifur, Bombur and Bofur were the obvious choice for a group of feasting Dwarves, with Bombur in the centre enjoying the biggest plate of food in the room.

Fili and Kili are next, the latter tuning up his fiddle while Fili sits ready to play.

The next group of three is the furthest spread out and provides the focus of action in the scene. Dwalin and Dori carry precariously balanced piles of plates through the room while Bilbo, as the real centre of the piece looks on with great anxiety.

Finally Oin and Gloin can be seen at the far right the one enjoying the Hobbits feast and the other ( Gloin) taking a second helping from the table.

I have also tried to keep some identity between the various sets of Dwarves reflecting their kinship. So each pair or triplet has some common hair, beard and clothing styles. The Bombur group all have their long hair tied at the back, while Balin and Dwalin show a similar receding hairline and have their long beards tucked into their belts.
Dori, Ori and Nori all have similar clothing styles, and Fili and Kili, being the youngest have more lustrous hair growth than their companions.
Oin and Gloin wear hooded surcoats while Thorin has a plaited beard and edged tunic.
Base diameter is 100 mm.