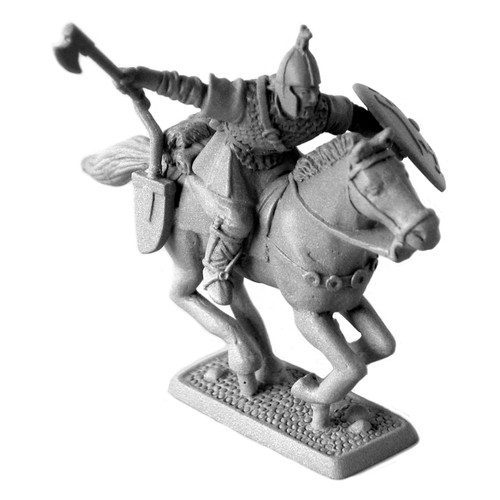 Frumgar was an early chieftain of the Eotheod, a people whose original home lay in the Anduin vale between the Gladden fields and the Carrock. After the defeat of the Witch-king at the great battle of Fornost and the fall of his kingdom of Angmar in 1975 T.A. the shadow was lifted from those lands around the northern Hithaeglir and accordingly Frumgar led the Eotheod north from the Anduin vale to a new home. This new land of the Eotheod was bounded on the east and North by the Misty mountains and the Ered Mithrin and on the south and east by the rivers Langwell and Greylin whose confluence formed the beginnings of the mighty Anduin.

Holger Frick commissioned this Designer figure and worked with Chris Tubb in finalising the details, pose and accessories.