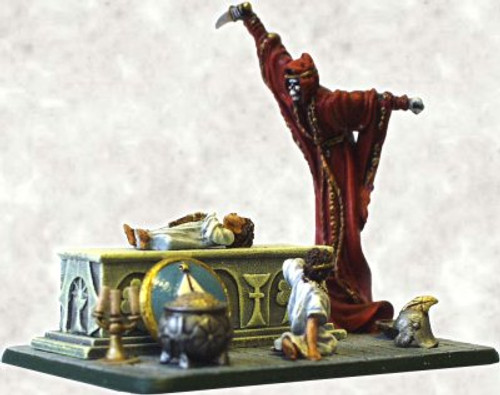 The Barrow-downs, was an area of low hills to the east of the Shire and the Old Forest, and west of the village of Bree. They served as resting places for the men of the north, as well as the Dunedain, until evil spirits, sent by the Witch-king of Angmar, began to inhabit them.

Fleeing the Black Riders, Frodo and his fellow Hobbits were ensnared by a wight in one of the numerous barrows. The four were separated from one another in a dense fog, and, all captured, ended up in the same barrow. Three of the Hobbits seemed under a spell, but Frodo, almost succumbing to the wight, was able to call out to Tom Bombadil.
Tom, hearing his song, came with haste to the barrow and dispelled the evil spirit from the tomb.

Tom Bombadil, whose house dwells in the Old Forest near to the Barrow-downs, had told them earlier to pass by barrows on the western side; the hobbits stopped for lunch on what must have been a barrow, and promptly fell asleep in the shade on the east side. After their rescue, the hobbits each took from the spoils of the tomb a finely crafted Dúnedain knife, and continued their journey towards Bree.