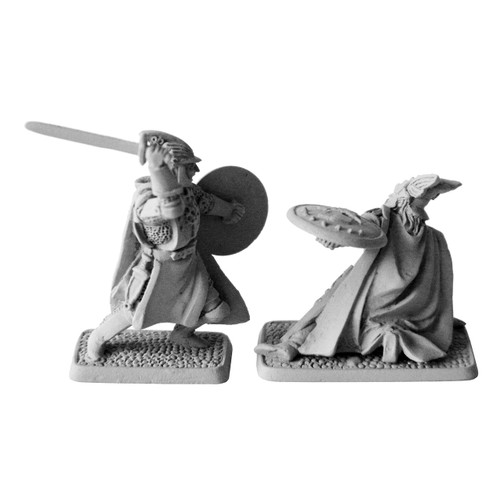 King Eldacar was a good king (21st King of Gondor) but was forced to flee when the rebel armies attacked during the Kin Strife Rebellion because the royal family felt he was less than a true Dúnadan of Gondor. Castamir was the most popular rebel and became the 22nd King of Gondor, but proved to be a cruel and arrogant ruler. Castamir had executed Eldacar's son Ornendil.
Eldacar returned after a decade with an army and gained popular support from the Gondorian people and defeated the rebels and killed Castamir.

This is the 108th release in the Gold Status Fellowship club and was July 2014's Winning idea. It was suggested by 'Halbarad Il'. Castamir is 27mm in height and Eldacar is 39mm in height (to raised sword tip).