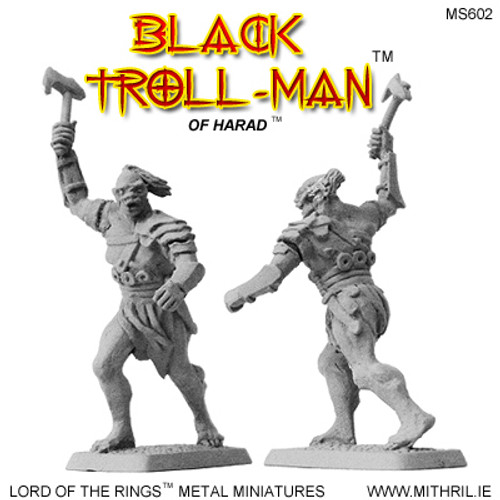 Part of Mordor's army in the battle of the Pelennor fields the black Troll-men were a fearsome breed that fought with the Variags and Orcs. Bred with men in the distant past, the Troll-men are far more intelligent than true Trolls but still retain much of their hardness and strength. They have thick hides, though not so thick as to find armour unnecessary and fight mostly with clubs and axes. They provides the armies of Harad with a terrifying front-line of shock troops that is able to break all but the most resolute of enemy formations.

This is the 96th release in the Gold Status Fellowship club and was June 2013's Winning idea. It was suggested by 'Shadyt'. 49mm in height from base to top of axe. Figure height is about 33mm (excluding base).