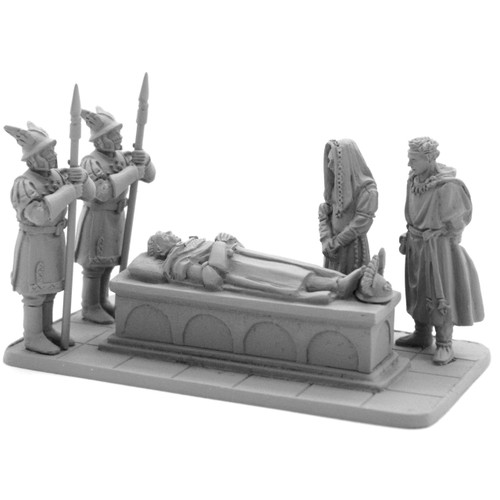 King Elessar was crowned in the momentous year 3019 T.A. and ruled the united kingdoms of Gondor and Arnor until year 120 in the Fourth age. His queen, Arwen, although of Elven stock, had chosen the fate of men rather than of Elves and remained always in Middle-earth, never seeking passage to the West. In this vignette both Arwen and her son Eldarion, stand before the tomb of Elessar, which is flanked by Minas Tirith guardsmen. At the foot of the tomb rests the winged crown of Gondor, which Eldarion will inherit. After this Arwen also bade farewell to her son and departed the city forever and passed out of all knowledge into the fading land of Lorien.

Dimensions: Figure measures 68mm in length, 40mm in width and 43mm in height to top of spear.

Weight of figure is 173 grams.

This is the 76th release in the new Gold Status Fellowship club. This is November 2011's Winning idea. It was suggested by 'Thingol'.