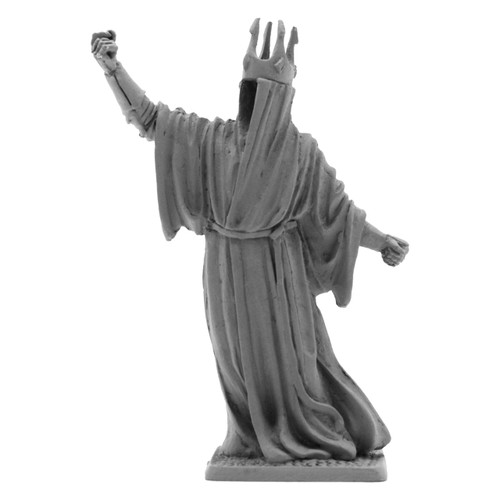 This is a direct statement by our sculptor:
"As you will probably have noticed, there has been a notable absentee in the recent Ms releases – namely Sauron at the Sammath Naur. This has been yet another instance of my perennial nervousness about making any representation of this character. For a long time I resisted any request to make the Dark-lord as I felt – and indeed still feel - that any depiction must fall short of anything that might do justice to this awful presence.

The horror of Sauron is described with such masterly language by Tolkien that any depiction must inevitably detract from the image that is built up in one’s mind. However having said that, I did of course make Sauron at Gorgoroth and Annatar, the latter of which I was reasonably pleased with. Sauron in Orodruin at the Sammath-Naur is the most difficult of all. He is no longer a malign spirit encased in black armour.

I have made three versions by now, the first in a kind of mask (which made him look a bit like a Cylon or Dumas’ man in the iron-mask!) and the second with more elaborate headgear. which I rejected. The third version (which itself has been revised a couple of times) is a lot simpler but hopefully more effective for all that. It should be ready to ship to the factory within a couple of weeks and is almost complete. I think that this will be my last tussle with the Dark-lord, but then again, I have said that every time!" by Chris Tubb.

Dimensions: Figure measures 57mm in height from bottom of base to the top of the raised hand. Note: this figure IS 32mm scale. Sauron is meant to be super-sized.

This is the 70th release in the new Gold Status Fellowship club. This is January 2011's Winning idea. It was suggested by 'Gildor'.