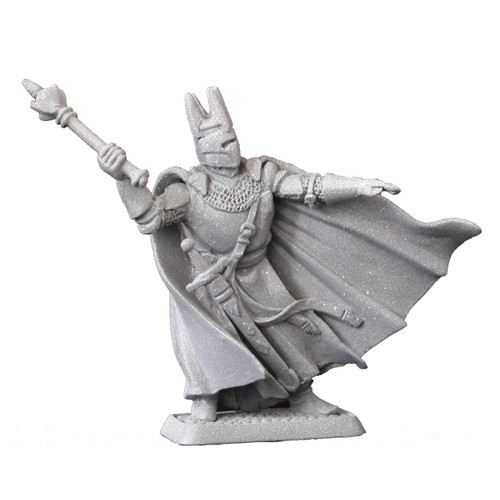 The Witch-king was originally a great king of Men. In the Second Age, he and eight other men were given the nine Rings of Power by the Dark Lord of Mordor, Sauron. The Rings gave them incredible power, which they used to further their own ambitions, but eventually the Rings completely corrupted them and turned them into the ghastly, undead Nazgûl.
The Lord of the Nazgûl reappeared in 1300 of the Third Age in the north near the lost realm of Arnor. There he founded the kingdom of Angmar. It is after the formation of Angmar and several conflicts with the Dúnedain of the North that the Lord of the Nazgûl became widely known as the Witch-king, Lord of Angmar, reflecting the fact that he practiced black sorcery.

Because of the great havoc he wreaked in the north, he became notorious among the peoples of Middle-earth as the terrible Lord of Angmar; thus, he thereafter retained his title of Witch-king, even long after he left Angmar. The Witch-king at Minas Tirith: The Witch-king, infused by Sauron with added demonic force, led massive numbers of Orcs, Haradrim, and Easterlings to besiege Minas Tirith. Before dawn, the great battering-ram Grond, likely assisted by the Witch-king's sorcery, was used to break the city's main gate.

He was the first ever enemy of Minas Tirith to enter its gate and grounds. Riding on a horse, the Witch-king was prevented from entering the city further only by Gandalf. Later in the battle, the Witch-King managed to strike down King Theoden, and was about the deliver the final killing blow when Eowyn challenged him. She was disguised as a man, so the Witchking did not realise the danger, as the prophesy foretold he could never be killed by any man.
She revealed herself and slew the fellbeast that the Witch-king was mounted on, before being struck by the Nazgul's mace. But the Witchking was suddenly wounded in the leg by Merry, who struck with his blade from behind, and that gave Eowyn a small window of opportunity to drive her blade into the creatures face, destroying him forever. Both blades disintegrated after piercing the Nazgul.
The enchanted blade used by Merry was of particular importance to this encounter. It had been forged by the men of Arnor during their battles with the land of Angmar, when the Lord of the Nazgûl had been its sorcerer king. The sword was imbued with powerful magic against the Witch-king himself, but it had lain unused in a barrow for centuries until it was discovered and given to Merry by Tom Bombadil.