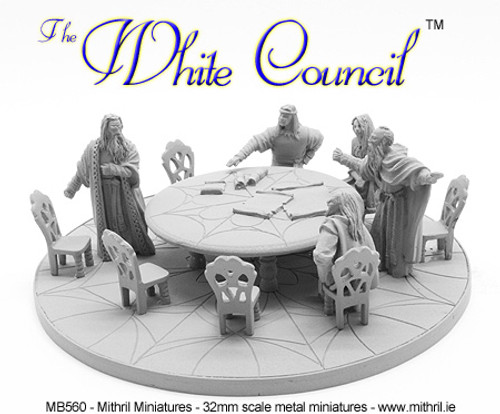 The White Council was formed in the Third-age to counter the re-emergence of the Dark Lord in Middle-earth. Its members comprised the Istari and the Wise amongst the Elven folk and Saruman was appointed as its head. It's first meeting was called by Galadriel in order to decide how best to discover the identity of the Necromancer of Mirkwood. By its second meeting in T.A. 2851 Saruman had already been corrupted by the Dark-lord through use of the Palantir and he blocked Gandalf's proposed attack on Dol Guldur.

The diorama depicts this second meeting of the White Council in which Gandalf is proposing the attack to an unbending Saruman, while Galadriel, Elrond and Cirdan look on.

The White Council is very easy to assemble with a comprehensive guide (pdf download option) included. Requires glue (not included).

The Boxed Set include 19 unprimed pieces, including Gandalf, Saruman, Cirdan, Galadriel and Elrond and a detailed table top and base. This is a heavy boxed set - about 500 g of pure metal. No cheap plastic parts!.