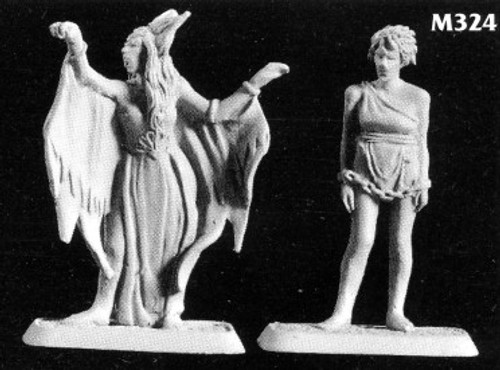 Miruimor was born Firailian, an intelligent Black Numenorean from Umbar aristocracy. Versed into black arts she soon admired Sauron the Necromancer and was chased for Heresy, she escaped incognito to Minas Tirith under a false name and learned many secrets, which brought the attention of Sauron who made her come and serve him in Dol Guldur. She was given rulership over the fortress Thuringwathost in Dagorlad. She managed to extend her life through blood rituals, taping into powers which remind the vampires of the First Age.
Carangil is a Sindarin princess from Mirkwood, captured and enslaved first in Dol Guldur then given as a "toy" for Miruimor in Thuringwathost. Though submissives she waits for her hour to escape and strike down her sorceress slaver.