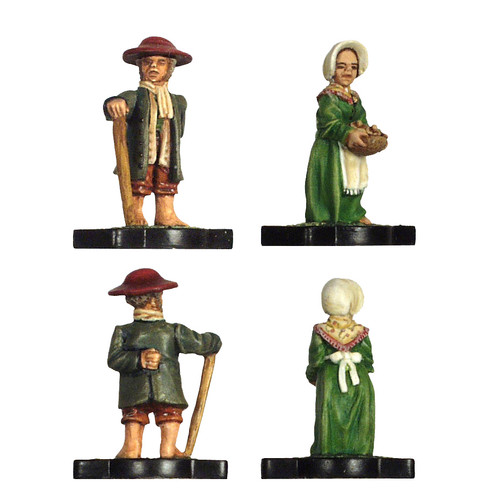 He lives on a farm called Bamfurlong in the Marish region of the Eastfarthing of the Shire. Mushrooms, highly prized edibles among Hobbits, grow abundantly on his land, and Farmer Maggot often has to deal with other Hobbits stealing them, which is one reason he keeps a pack of large, fierce dogs.

It is best to assemble the figure except the hat, which it is easier to paint the face and fit the hat afterwards.

He is described as a broad thickset hobbit with a round red face. To this end our painter used 955 as a basic skin tone and the mouth and eyes darkened with 804 giving him quite a ruddy appearance. You can just see his shirt & belt in-between his waistcoat, it may be best to paint these before his waistcoat as it would be difficult to reach these once the waistcoat is painted. We chose a light yellow green 857 to contrast with his overcoat. His necktie and waistcoat are then painted with 819 with the slightest wash of 874 with a light dry brush of white.

His overcoat is painted using mid green 924 with a bronze green 897 used to darken the folds. Also buttons are added with corresponding buttonholes. His breeches are painted with red leather 818 and the folds darkened with 814. The hat is painted with 815 and, dry brushed with 946.

Mrs. Maggot is carrying the basket of mushrooms that was given to Frodo as a farewell gift. Her face hands and foot are given a flesh tone of 955. Her mouth was then picked out with 803 and eyes and eyebrows given the lightest treatment of 983. The skin around the inside of bonnet was also picked out with the faintest line of 983. Her bonnet and piny are given a coat of white and toned down with a wash of 837 and then carefully highlighted to give the look of linen.

Her basket is panted with 977 with a weave of 874. The mushrooms are painted with 819 slightly dry brushed with white and the insides of the cups darkened with 875. Her dress is given an overall coat of 857 and a thin wash of 968 that flows into the folds.