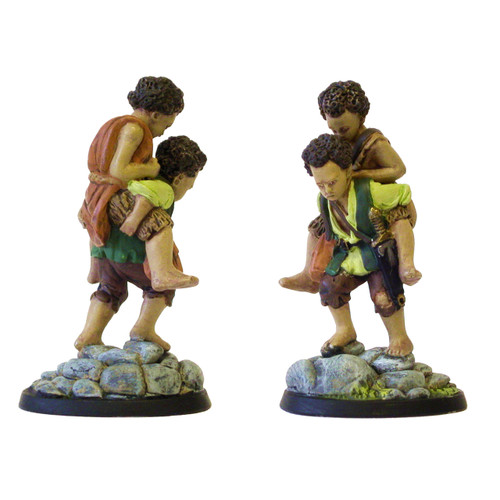 Frodo and Sam: Frodo was the Ringbearer and his gardener and friend Sam accompanied him to Mount Doom to destroy the One Ring. The Ring was made by Sauron thousands of years ago and he had poured much of his power and essence into it. It had been cut from his finger in The Last Alliance battle in Mordor and was carried by a series of Ringbearers until it came into the possession of Frodo Baggins. The ring was the key to the defeat of Sauron, and could only be destroyed in the fires of Mt.Doom where it had been forged. However it eroded Frodo's spirit and Sam ended up carrying him the last bit of the journey up the mountain. Frodo was too exhausted to walk himself.

Height of figures 44mm to the tip of Frodo's head.