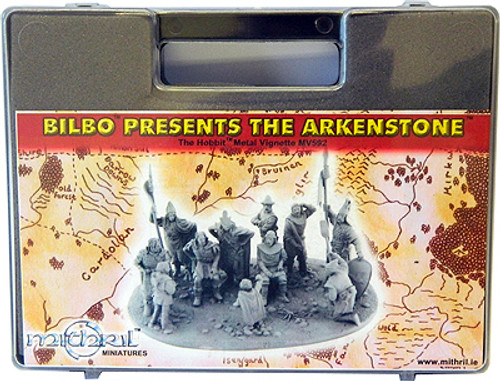 This piece depicts the moment from "The Hobbit" where Bilbo presents the Arkenstone to Bard of Esgaroth in the presence of the Elvenking. Our sculptor imagined the scene to be that of an armed camp, engaged in warlike preparations. The armies present are those of both Lake and Forest. Some figures which have appeared earlier in the Mithril range have made re-appearances (in new forms) and some new ones are also included.

Behind the seated figure of Thranduil the Elven High-captain of Aradhrynd is seen again, here leaning forward to advise the Elvenking. Behind him stands an Elven Royal guardsman, similar to the one depicted in "Halls of the Elvenking” but this time bearing the king's standard.

Behind Bard is one of his company of archers who has escaped the conflagration of Esgaroth and next to him, directly behind Bard stands an Easterling outlier scout in the service of Laketown, illustrated in Tengwar no.3. Flanking the group on the right side of the piece is a reprise of the Laketown guardsman but wearing lamellar armour and carrying the standard of Esgaroth. Kneeling in the right foreground is a Laketown oarsman.

At the left of the scene stands a version of the earlier Laketown adventurer who having offered his service to Bard is arming himself with the aid of his squire. At the centre, before the "Captains and the kings” stands the small figure of Bilbo offering the precious Arkenstone to the new master of Laketown.