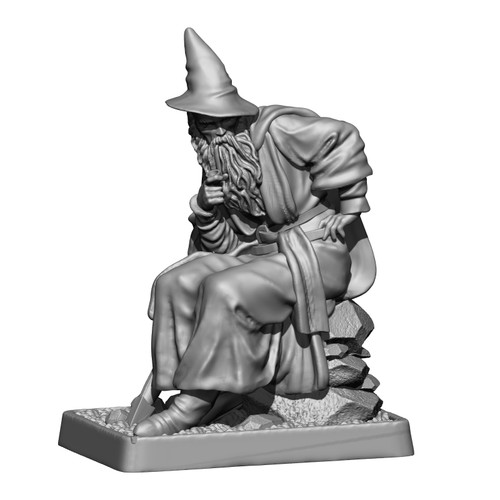 Gandalf the Grey, later renamed Gandalf the White after his return from the battle at Moria, was a member of the Istari, a group of Wizards sent to Middle-earth to assist Men in resisting the influence of Sauron. He was a Maiar, a type of spirit, that took the form of an old man. Gandalf bore the magical ring Narya, after being gifted it by Círdan. The order was originally lead by Saruman the White, but when he became corrupted by Sauron and his own greed and fear, Gandalf replaced him as head of the order.
Gandalf the Grey travelled all around the west seeking to aid all the races and was known by many names, including Mithrandir and Stormcrow. His original name however is Olórin.

Only 100 of these figures are produced. This is the 190th release in the Gold Status Fellowship club. This was the winning idea from October 2021 and was submitted by Fellowship member "spirodotgeek". This is the second fully resin figure, undercoated with matt grey primer. It is created in one piece. The base has the manufacturer name, MITHRIL, date and number on the sides of the base instead of the bottom, due to technical requirements in its manufacturing. It measures 23mm in length, and is about 31mm in height from the base to the top of Gandalf's hat.