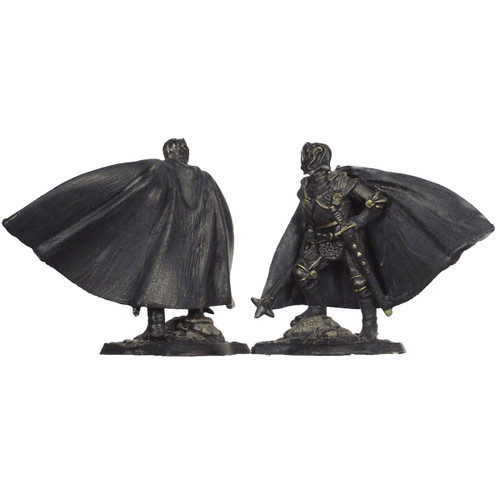 In origin, a prince of the Royal house of Numenor in the Second-age, the Witch-king was seduced by the power of the nine rings and fell thrall to Sauron, as the price paid for that terrible gift. The Witch-king became the greatest of the Nazgul and second only in power to the Dark-lord himself.

During Sauron's final attempt to become Lord of Middle-earth during the Third age, the Witch-king played a vital role in his master's designs. As a plan to subvert and finally destroy the Northern realm of Arnor, the Witch-king established himself in the north of Eriador in the barren land of Angmar, where he gathered his power and sent out spies. His evil machinations were largely responsible for the fragmentation of Arnor into three successor kingdoms each of which was confronted and finally destroyed by the power of Angmar. During the War of the Ring, the Witch-king led the Dark host to battle at the Pelennor fields and perished there at the hands of Eowyn Dernhelm with some help from Merry.

Chief of all the servants of Sauron, the Witch-king was, in origin, one of the black Numenoreans who the Dark-lord seduced to his own service by the gift of one of the Nine rings. The rings conferred great power upon their wearers but also subjugated them forever to the will of Sauron. As well as his great talents in sorcery the Witch-king was Sauron's ablest military commander. He founded the Northern Kingdom of Angmar and was the architect of both Arthedain's and Cardolan's destruction. He also successfully wrestled from the Southern kingdom of Gondor the great citadel of Minas Ithil.