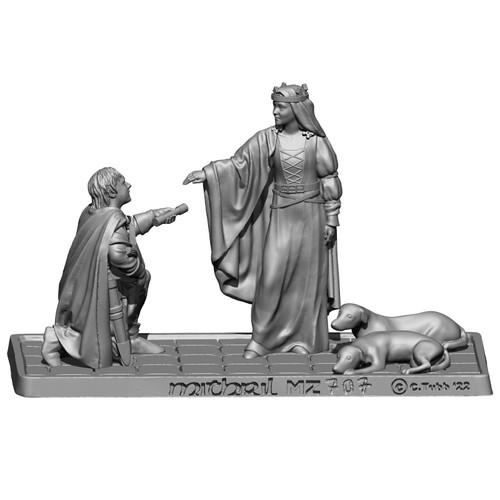 Fíriel was the third child and daughter of King Ondoher of Gondor.

Fíriel was wed to prince Arvedui of Arnor in T.A. 1940 when Arvedui's father Araphant made an alliance with Ondoher. The alliance proved fruitless, however. Neither side could send help to the other as both Kingdoms came under attack: Arnor by Angmar and Gondor by the Wainriders.

During the Disaster of the Morannon, Ondoher and his sons Artamir and Faramir were killed, which meant that according to the Law of Númenor, Fíriel should have become the Ruling Queen. Arvedui referred to this ancient law, as well as the fact that he was a direct descendant of Isildur, as arguments to claim the crown of Gondor, but he was refused.

Fíriel remained with her husband in the north, though her fate in the fall of Arthedain was never recorded. She did have a son, Aranarth, who continued the line of Isildur.

Only 100 of these figures are produced. This is the 192nd release in the Gold Status Fellowship club. This was the winning idea from November 2021 and was submitted by Fellowship member "Luthien Tinuviel". This is the fourth fully resin figure, undercoated with matt grey primer. It is created in one piece. The base has the manufacturer name, MITHRIL, date and number on the sides of the base. It measures 55 mm in length, and is about 34mm in height from the base to the top of Firiel's head.  It comes in three pieces, the base with dogs, the messenger and Fíriel.

MS606 Lord of the Rings 'Forlong™ the Fat' Fellowship Figure.

2022 Lord of the Rings 'ELROHIR™ at Pelennor Fields' Christmas Miniature.