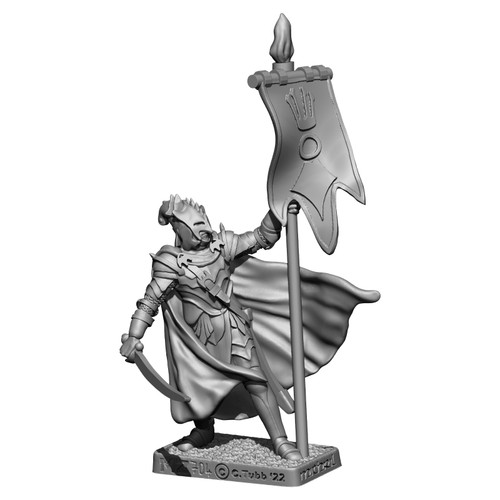 Black Numenoreans are the descendants of Men who got corrupted by Sauron during his time in Númenor. They are very useful as they are intelligent and capable warriors or diplomats, but utterly evil and loyal to their master, Sauron. This Black Numenorean bears one of Sauron's flags or standards.

Only 100 of these figures are produced in either Hybrid or 3D Printed Resin. This is the 188th release in the Gold Status Fellowship club. This was the winning idea from August 2021 and was submitted by Fellowship member "maxtarna". This was originally released in March 2022 as a hybrid figure of resin and metal and later in November 2022 it was remade in 3D Printed Resin due to a change in manufacturing practice.
The Hybrid version requires assembly as it comes in 5 parts, the figure itself (resin), its base, pole, standard and sword with arm (all metal). The 3D Printed Resin version is made in one piece and primed.

The Hybrid version measures 50mm in height from bottom of base to top of standard, The figure itself is 32mm scale. All metal parts (in the Hybrid version) are made of an alloy of tin, zinc and antimony.

The Resin version measures 60mm in height from bottom of base to top of standard, the figure itself is 35mm scale.

MZ696 Lord of the Rings 'The Mouth of SAURONâ„˘' 32mm scale Fellowship figure.

MZ701 Lord of the Rings 'Watch Guard at the gates of ORTHANCâ„˘' Metal Miniature.

MZ700 Lord of the Rings 'GALADRIELâ„˘ in the Swan-Boat' 32mm scale Fellowship vignette.

MZ703 Lord of the Rings 'EOWYNâ„˘ with the head of the Fell-beast' Resin Miniature.

MZ696 Lord of the Rings 'The Mouth of SAURONâ„˘' 32mm scale Fellowship figure.

MB689 The Lord of the Rings 'THE FELLOWSHIP OF THE RINGâ„˘' 32mm Scale Metal Miniatures.