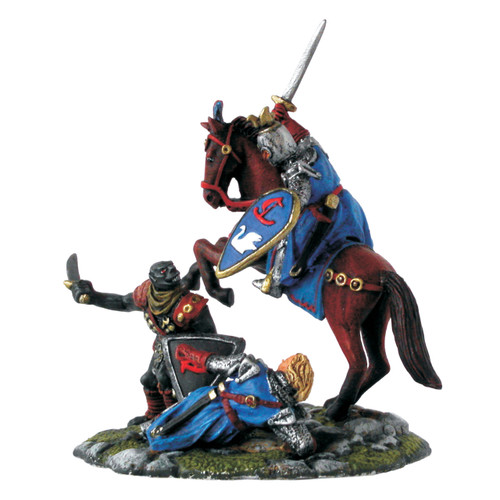 Prince Imrahil and his proud knights helped defend Gondor's Minas Tirith during the Battle of the Pelennor Fields.

'And now the fighting waxed furious on the fields of the Pelennor; and the din of arms rose upon high, with the crying of men and the neighing of horses. Horns were blown and trumpets were brayng, and the mumakil were bellowing as they were goaded to war. Under the south walls of the City the footmen of Gondor now drove against the legions of Morgul that were gathered there in strength. But the horsemen rode eastward to the succor of Eomer: Hurin the Tall, Warden of the Keys, and the Lord of Lossarnach, and Hirluin. of the Green Hills, and Prince Imrahil the fair with his (Swan) knights all about him.'