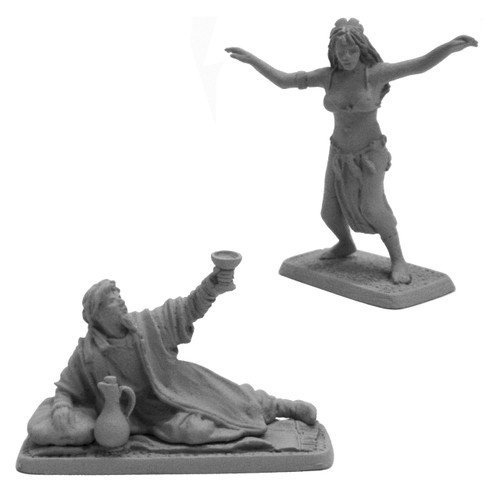 Bounded by Mordor to the north and the Mumakan lands to the south lie the deserts of the Haradwaith. Huge in area the lands of Harad are, for the most part, burning wastes.

The Haradrim live on its fringes – on the coastal line in the west and in the mountainous regions of Far Harad in the south. The peoples of the coastal region are great traders and cities such as Umbar act as trading hubs for merchants and travelers. The traders of Harad ply their goods across the great deserts to Khand and to the east of the Ered Harmal, and find relief from the dust and heat in the several oases which are dotted throughout the burning wastes. Some of these oases have settlements which offer refreshment and entertainment to the weary traveler.

This vignette shows such a scene. The trader, having watered and fed his camel train is resting, drinking wine and watching a dancing girl. Compatible with the Haradan Musician MS596.

This is the 81st release in the Gold Status Fellowship club and was May 2012's Winning idea. It was suggested by 'Hwolf'. Belly-dancer measures 32mm in height, trader measures 37mm in length of base.