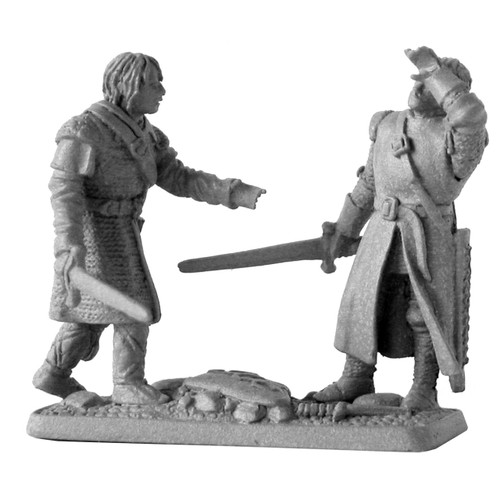 At Helm's Deep, Aragorn looked into the palantir of Orthanc and decided that he must take the Paths of the Dead. Eomer feared that he would never see his friend again, for it was said that no living man could pass through the Dark Door. But Aragorn replied "But I say to you, Eomer, that in battle we may yet meet again, though all the hosts of Mordor should stand between."

During the great battle at Minas Tirith in Gondor, Eomer did indeed meet Aragorn when he went to battle the Corsairs, only to see Aragorn's standard on the lead ship instead. Eomer fought his way through the remaining Mordorian hordes to greet Aragorn.

This is the 23rd release in the Gold Status Fellowship club and was June 2007's Winning idea. It was suggested by 'ddaines'. Both figures measures 32mm in height.