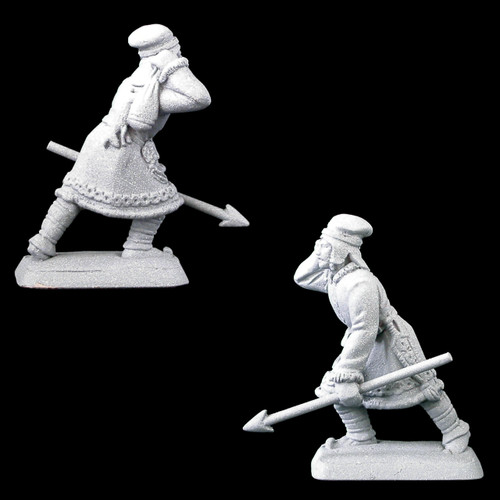 The Lossoth or Snowmen of were few in number and dwelt on the shores of the Ice bay of Forochel, beyond the northern borders of ancient Arnor. Their clothing was made from animal skins and would have been highly decorated with abstract patterns and borders. Their headwear, which was probably made of a thick felt, would also have been decorated. They hunted, primarily with spear and harpoon and did not take kindly to strangers, though they did give aid to the fugitive Arvedui who fled to Forochel after his defeat by the With-king at the battle of Fornost in 1974 T.A.

When an elven-ship came to rescue him, he rewarded the Lossoth for their friendship with the Ring of Barahir. His hosts sensed approaching disaster, and warned Arvedui not to board the ship. Against their advice, he did so, but a great storm overwhelmed the ship and last King of Arthedain was lost in the cold waters of the far north.

This is the 22nd release in the Gold Status Fellowship club and was May 2007's Winning idea. It was suggested by Tom Wrich. Lossoth Hunter measures 32mm in height.