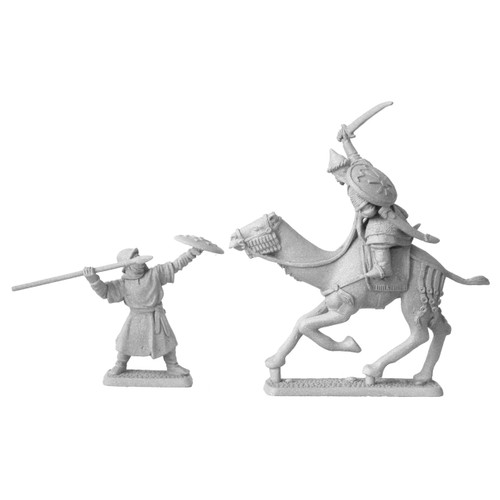 The Haradrim were a fierce warrior people who lived in the hot desert areas of Southern Middle-earth. They were the perennial foes of Gondor and the land of Harondor; their common frontier was a scene of almost continual strife. They were ready allies of the Dark Lord in the war of the Ring and contributed much of his most effective forces.

The Haradrim would have deployed several kinds of camel mounted units, both light skirmishers and medium cavalry; The Haradan champion is one of the latter. He is clad in chain mail and is scimitar armed. His clothing would be of rich colours notably reds, yellows and purple.

His opponent is one of Gondor's desert auxiliaries, drawn from the population of Southern Gondor and armed as a local defense force against their Southern neighbours. His shield bears the usual seven stars of Gondor but with a central palm-tree motif. His clothing would be of dull unbleached linen or wool and his ubiquitous Gondorian helmet of dull grey metal.