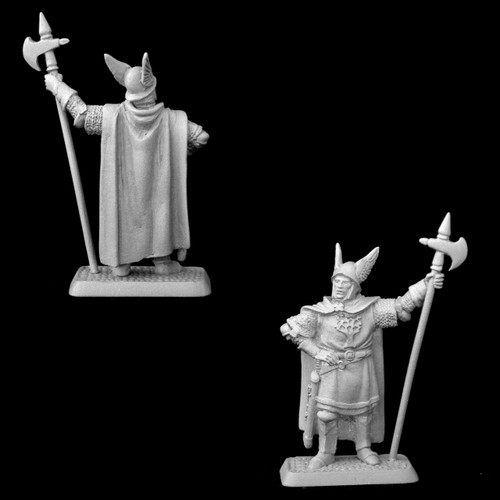 Guard of the Citadel loyal to Faramir. Beregond was the son of Baranor. Beregond had a son named Bergil, who was ten years old at the time of the War of the Ring and who remained in Minas Tirith during the siege.

Beregond was a man of arms of the Third Company of the Citadel. He greatly admired Faramir, son of Denethor, the Steward of Gondor. He was assigned to instruct Pippin Took - the newest member of the Guard of the Citadel - in the pass-words and other matters. Beregond was interested to meet Pippin, for he had never met a Hobbit before, and he was amazed to find that although Pippin was like a child in appearance he had been through more dangers than most Men of Gondor.

Beregond was greatly concerned when Faramir was pursued back to Minas Tirith by Winged Nazgul, and he feared for Faramir’s safety when Denethor sent his son back to guard the river crossing the next day. Faramir was brought back to the City near death. That night Beregond saw a strange light in the tower, which he believed indicated that Denethor was confronting Sauron with his mind. Beregond was correct – it was the light of the palantir that he saw.

Beregond was on duty as the sentinel at the gate of the Citadel when Pippin came to tell him that Denethor intended to burn Faramir alive. Beregond had to choose between his duty to remain at his post and his love for his Captain. Beregond ran to the Silent Street to help Faramir. When he came to the Closed Door, the porter would not let him pass and Beregond was forced to kill him – an act he deeply regretted. At the entrance to the House of the Stewards, Beregond slew two of Denethor’s servants who were trying to light the funeral pyre and he stood on the steps warding the others off with his sword until Gandalf arrived.

Gandalf rescued Faramir from the pyre, but Denethor drew a knife and advanced on his son. Beregond stepped forward to stop his lord from hurting Faramir. Denethor then committed suicide by setting himself on fire. Beregond helped carry Faramir to the Houses of Healing and Gandalf entrusted him with the key to the Closed Door.

Beregond reported his actions to the Chief of the Guard, and Gandalf recommended that Beregond should be assigned to guard Faramir in the Houses of Healing. Beregond was present when Faramir awoke and he was overjoyed.

After the coronation of Aragorn, King Elessar, Beregond was brought before the King to receive judgement for leaving his post and for killing the porter and Denethor's servants on hallowed ground. The penalty for these acts was death, but the King showed mercy because Beregond had done them out of love for Faramir and because he had fought bravely in battle. Beregond became the Captain of the Guard of Faramir called the White Company.

This is the 15th release in the Gold Status Fellowship club and was September 2006's Winning idea. It was suggested by Vilho Väisänen (Will the Fey). Measures 43mm in height (base to halberd) approximately.