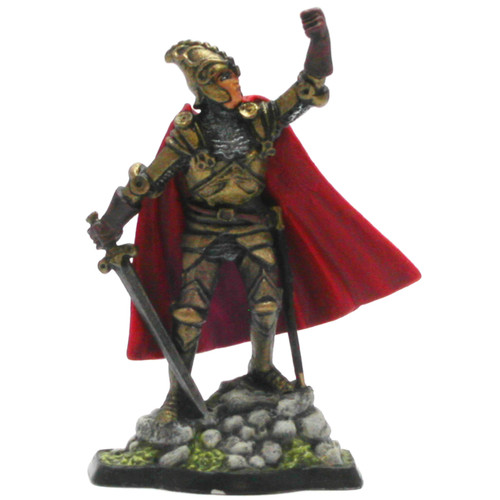 Isildur was the son of Elendil, a King of Humans in Middle-earth. Elendil died fighting Sauron and Isildur took the broken sword and cut off the One Ring from Sauron's finger, destroying its physical form due to being separated from the Ring which contained most of Sauron's power. Isildur kept the ring, against Elrond's advice, as payment for the loss of his father.

The Painting Guide:
The Numenorean penchant for black and silver should be much in evidence for this miniature. Starting with a mix of silver and black for treatment on the metallic items and a mid grey for leather and cloth with a light earth for the terrain is a good preparation for an all-over wash of black. After this has thoroughly dried the miniature will be almost complete.

The metallic detail can be picked out with a careful and judicious silver highlight as the final appearance of the armour is best left somewhere between black and silver or gunmetal.

The main painting effort for this figure lies with the face which must be clearly defined light and warm area amid a vast expanse of cold, dark, hard metal. A dark flesh tone can be progressively lightened by highlights on the raised areas whilst resisting the temptation to finish off with pure white will enhance the natural appearance of the miniature.