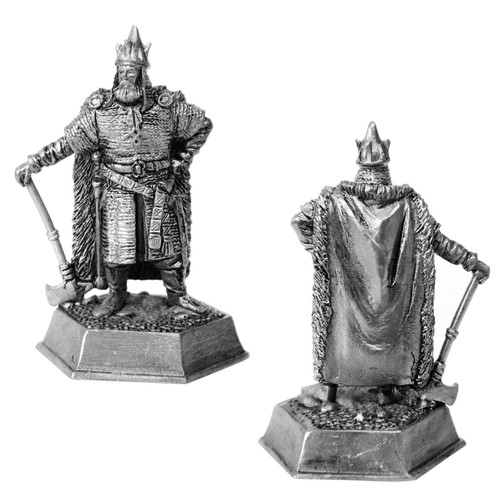 A Northmen city on the Southern slopes of Erebor, Dale was a thriving and wealthy city for much of the Third-age. It's wealth was based largely upon its trade with the Dwarves of Erebor, and its culture and costume had much Dwarven influence. It's last king, Girion, is depicted wearing a high-pointed helm of Dwarven design with a long surcoat of fine wrought mail. The city was destroyed by Smaug when he descended upon the lonely mountain in 2770 T.A. and Girion was killed in the inferno. Bard the archer of Laketown was a descendant of Girion and Bard’s own grandson became king of the re-founded city after the War of the Ring.

Measures 43mm from bottom of base to top of helmet. Ships in a blister pack.

There were 180 32mm scale metal miniatures produced. The majority are Antique Finished. This means that they are polished, dipped in black paint, then the excess paint is removed on the raised surfaces and left in the deeper areas, then polished again which gives fantastic detail to the figure.