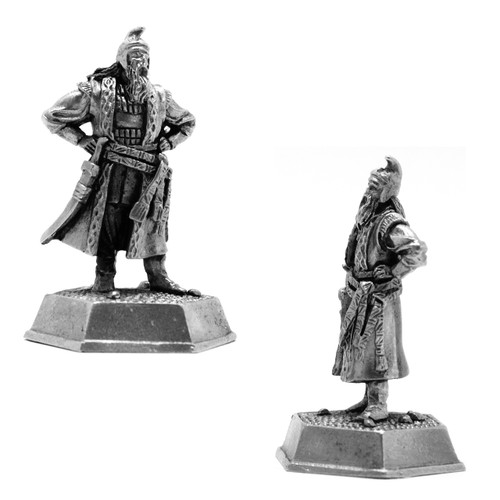 "Easterling” was a general name given by the settled peoples of Gondor and Rohan to those nomadic tribes who inhabited the lands of eastern Rhovanion and those vast steppes beyond the sea of Rhun. Divided into many clans and tribes the Easterling peoples were pastoralists who lived in temporary tented encampments and who moved according to the pasturage available to their great herds of horses. Famed for their skill as horsemen and for their dexterity with the composite bow, the Easterlings were fearsome warriors, and on many occasions have raided and invaded the western lands. Two significant invasions into the western lands took place in the Third-age.

From 1851 to 1941 T.A. after repeated attacks and incursions, Gondorian forces were beaten back to the line of the Anduin only to snatch victory from defeat by routing the Easterlings at the field of Dagorlad. The second invasion of substance was that of the Balchoth in 2510 T.A. an Easterling people who were in the service of Sauron. They penetrated even beyond the Anduin and were beaten back with great difficulty. At various times the several tribes would unite under the leadership of a strong chieftain and at such times would be much more dangerous to their western foes. This figure represents such a chieftain.

Measures 42mm from bottom of base to top of helmet. Ships in a blister pack.

There were 200 32mm scale metal miniatures produced. The majority were Antique Finished. This means that they are polished, dipped in black paint, then the excess paint is removed on the raised surfaces and left in the deeper areas, then polished again which gives fantastic detail to the figure.