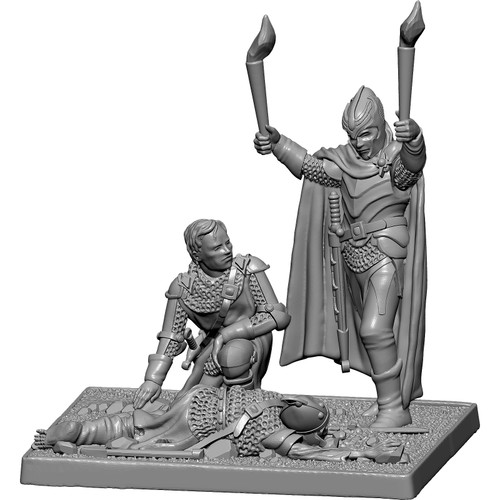 Elladan was a son of Elrond the Half-elven and Celebrian of Rivendell. Both he and his brother closely cooperated with the Rangers of the North, including Aragorn. Baldor the Hapless was the son of Brego and grandson of Eorl the Young. He foolishly ventured past the Dark Door on the paths of the Dead and was never heard from again until his golden clad body was found by Aragorn and the Grey Company.

This is the 169th release in the Gold Status Fellowship club and was October 2019's Winning idea. It was suggested by 'barliman'. The height from the base to the top of one of the torches is 50mm. There are eight parts in this piece (i.e.: Elladan, Aragorn, base, helmet, two swords, arm, arm with torch.)

MZ678 Lord of the Rings 'TOM BOMBADIL™ with the One Ring' Fellowship figure.