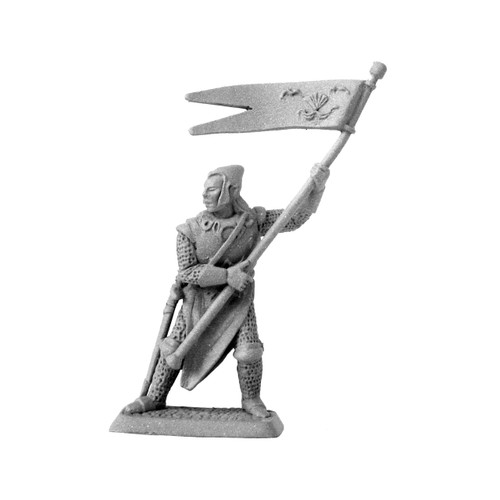 Thranduil was also known as the Elvenking, ruler of Mirkwood forest and surrounding lands. In The Hobbit book he lead his army up to the Lonely Mountain, his standard flying proudly, to lay claim to a fair share of Smaug's horde of treasure, now the dragon was finally dead. His people had suffered under Smaug's reign of flame and terror as much as the other races.

When the Dwarves refused to share, he laid siege, along with the men of Dale who also had claim to it, until Bilbo brought him the Arkenstone, a prized jewel that was a Dwarven heirloom that was important to Thorin, the leader of the Dwarves.

As events progressed, both good and bad, Elves and Dwarves eventually joined forces with the Men and fought the gathering hordes of Wargs and Goblins (orcs) that also heard of Smaug's demise. This was later called the Battle of the Five Armies™.

This is the 19th release in the Gold Status Fellowship club and was February 2007's Winning idea. It was suggested by David Daines. Measures 49mm in height approximately (to tip of standard).