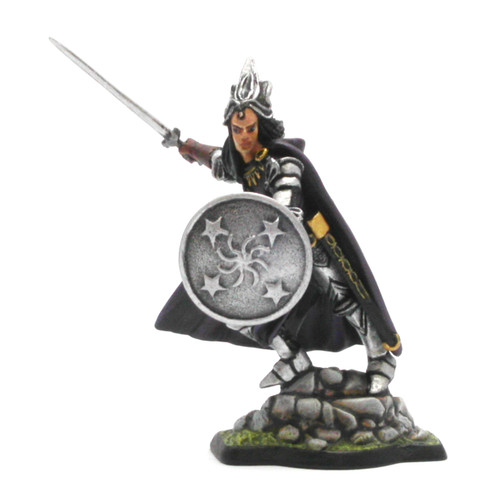 Gil-galad was the last High King of the Noldor in Middle-earth.
Gil-galad was the first of the Eldar to mistrust a stranger calling himself Annatar, and forbade him from entering Lindon. His mistrust was well founded, for it was soon learned that Annatar was in fact Sauron. After Sauron forged the One Ring, Gil-galad was given one of the Three Elven Rings: Vilya, the Ring of Air (and most probably also Narya, the Ring of Fire). Just before Gil-galad's death, Elrond was given Vilya for safekeeping (and Narya was given to Cirdan).

The Painting Guide:
A starlight spectrum of silver and blue/grey is required for this Elven-lord.

Choose a neutral base coat of grey or grey/blue and apply this all over the figure. This will pull the appearance of the miniature together, particularly after gluing and/or cementing. A wash of black over near silver will highlight the detail of the armour, which can be enhanced further by a light drybrush of silver over the most prominent parts.

Getting the washes of colour out of the way in the early stages is a good idea, as they will not bleed onto the more detailed parts later.

His surcoat is particularly effective in blue. Progressively lighter tones of this as you work towards the edges and raised areas will show the movement of the figure to good effect. A dark grey/green for the cloak and leather items handled in a similar way will suit the cool palette of colours and will contrast well with the pale flesh of an Elf.

The face is best dealt with by starting with a dark red or brown and working up through the flesh tones to a cream or bone colour at the most raised parts, but consider that the mouth and nose areas are best treated without too much deep shadow. Blond hair can be reproduced by an initial application of cream and then washed carefully with a watery mix of tan or sienna.

The rocky terrain of the base is treated with a dark wash over a lighter colour without too much highlight as this would detract from the main focus of the miniature.