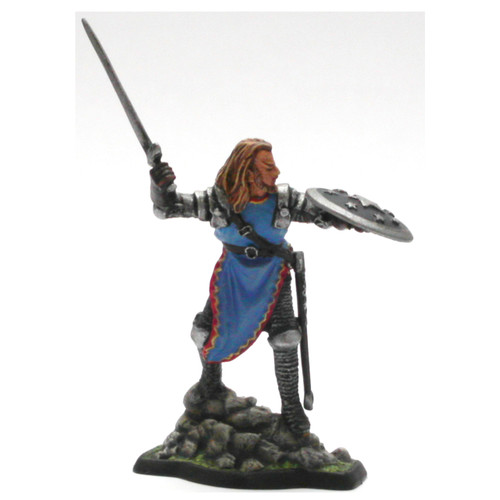 He was a Telerin Elf, a great mariner and shipwright, and lord of the Falas during much of the First Age. He was the bearer of the Great Ring Narya, which he in turn gave to Gandalf.

The Painting Guide:
One of the only elves to possess grey hair in his more mature years and the only recorded instance of an elf with a beard, Cirdan was unique.

A base coat of blue/grey followed by a solid coat of silver over the metal items will be a good preparation for an overall wash of black. Picking out the silver detail with a sparing use of dry-brushed highlight will give the appearance of heavy armour, and fine silver filigree.

Elven preferences for blues and greys dictate the colours of the clothing and leather items. These should be highlighted carefully to bring the miniature to life before progressing to the final stages. The same treatment using blue tones on the shield as on the rest of the figure will lend a consistency throughout.

Pale elf flesh can be treated with a highlight of bone or cream over a mid tone of flesh colour on top of an initial covering of brick red or a warm dark brown.

As most of the figure will be complete in the early stages, it pays off to place great effort into careful highlighting of the shield and clothing.

It is preferable to keep the detail on the base a rather muted colour, as any light achieved further up the figure will be minimised by too much attention given to the area around Cirdan's feet, and will detract from the main dynamic thrust of the pose.