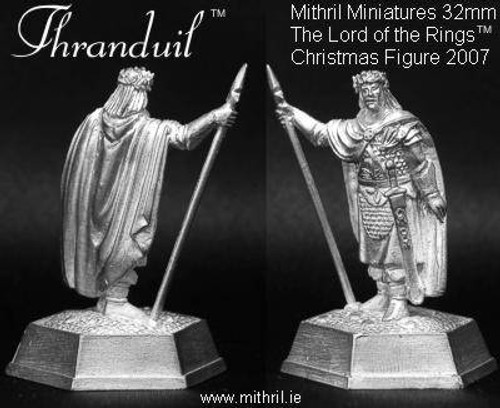 The first 50 32mm scale figures sold were primed in acrylic paint (This Version is SOLD OUT) and the remaining 150 figures were polished. Picture(s) shows primed version.

Thranduil was a Sindarin Elf who had traveled eastward from Lindon before the building of Barad-dûr, and king of the Silvan Elves in the northern part of Mirkwood. In The Hobbit, he is said to have blond hair.

In The Hobbit, he is simply called the Elvenking. When Thorin Oakenshield and his party of Dwarves enter northern Mirkwood, they are captured by Thranduil's guards and locked up when they refuse to divulge their intentions, before being freed by Bilbo Baggins. After the death of the dragon Smaug, who had brutalized the Silvan Elves for years, Thranduil demanded a share of the treasure the Dwarves recovered from Erebor, Smaug's hideout. Thorin refused, until Bilbo gave Thranduil the Arkenstone (which meant more than a river of gold to Thorin).