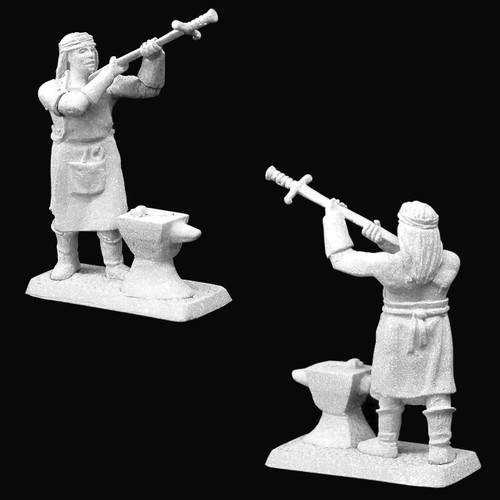 The Flame of the West, the sword of Aragorn Elessar, reforged by the Elves of Rivendell from the Shards of Elendil's ancient sword Narsil. It is shown here being handled by a master smith as he checks the blade is perfect.

More information on the Shards of Narsil: At the end of the Second Age, Elendil's great sword Narsil was already an ancient and famous weapon, forged more than three millennia earlier by the Telchar of Nogrod. In the War of the Last Alliance, Elendil fell, and his sword was broken, but its remains were brought to the North-kingdom. These shards were carried by Elendil's heirs throughout the Third Age, as a token of their ancestry, until the time of the War of the Ring. The shards were reforged by the smiths of Rivendell into Aragorn's sword Andúril.

This is the 25th release in the Gold Status Fellowship club and was August 2007's Winning idea. It was suggested by 'ddaines'. Figure measures 37mm in height to top handle of raised sword. Base is 25mm in length.